It’s been a fairly easy going weekend because of the holiday. We’ve still been working daily but usually only for a few hours in the morning. We finally were able to sight in my rifle yesterday. It only took about 5 shots to get it back on target, but it was was about 3 inches high and just over one inch to the right. Having that done, I couldn’t resist taking a lil hike with the rifle to see what I could see. I decided to climb the rock hill behind the lodge for a nice view and a few pictures. There was a lot of grass in between the rocks so I took it fairly slow, keeping my eye out for snakes and other dangers along the way. 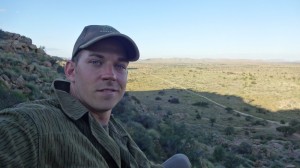 It was nice to take a moment to just sit and enjoy the view.
Here are a couple more pics (the first one is a Rock Dassie): 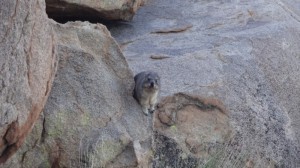 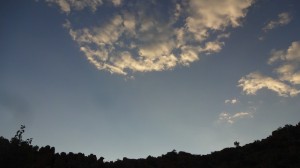 So birds for Easter. That’s right, birds. Twice in a couple of days I had a small bird fly into (somehow) the lodge. There must be a tiny opening that the birds have found where the grass roof meets the concrete structure because they have been getting in when all the windows and doors are closed.

So get this… A few days ago I was on my lunch break in my room and I noticed a bird flying around the tall ceiling. It was just about time for me to get back out there so I couldn’t make any effort to help the bird get outside. I felt bad but there was nothing I could do at the moment. And if I left the windows open then I would have had tons of bugs and mosquitoes to love me tenderly while I slept that night… no thank you.

Eventually I got home after the long day of getting things done around the property and I looked around for the bird but I didn’t see any sign of it so I had hoped it had found its way back out the same way it came in. I woke up early the next morning with sleepy eyes and began putting my clothes on and grabbed my flashlight off of the nightstand to ritualistically peek into my shoes for something venomous and horrid when out of the corner of my eye I saw a dark blob tucked away between the night stand and the bed. My reflexes instantly thought big big big nasty spider but after a second I realized it was either a bird or a bat. Upon closer inspection it was definitely an adolescent bird (oh thank goodness haha). So somehow this thing managed to crawl into this space in the dark while I was sleeping without my being aware of it.

Well it wasn’t moving… Let’s not celebrate too soon, just in case, you know? But if it is still alive, I have to get it outside. So before trying anything too bold I figured I probably only had one shot at this if it was in fact just sleeping and not dead in the corner. I sneaked over to the window, pushed the curtains aside and opened it all the way. I figured if it was only semi alive and not feeling well at least I could reach down out of the window and place him on the tiny ledge. So now that I had my plans in place, I walked back around the bed with flashlight in hand and slowly reached my other hand into the deep corner with my fingers spread wide apart for maximum “grabbage”. I must have only been 6 inches away from the bird when it’s eyes snapped open. Everything went into slow motion, I stopped my single handed assault for one moment while we both stared at each other with a sort of “uh oh” kind of look. He panicked. So I shot my hand towards him and grabbed him up as best I could without hurting him.

Success!!! I ran around the bed, reached way out of the window and placed him gently on the tiny concrete ledge and backed away. I watched him for a minute. He was a lil wobbly, but after a few seconds he took a drunken couple of hops on the ledge, paused, then flew away onto a rock about 20 yards away. I reached for my camera but by the time I had zoomed in on the rock he had landed on he was already gone. So with a little luck he got some food and water in him shortly after that and is good as new.

I did however get this picture the following day… 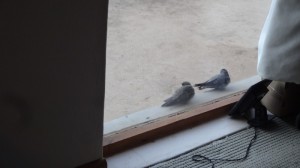 The young birds have been perching here often recently. I’d like to think this is their way of rewarding me for saving one of them, but I’m sure they are just doing what birds do.

So then two days later (4/21/2014) another bird got in. It was small, somewhere in between a finch and a sparrows size. This time I was free and was able to try and get him out. I opened the door but even with some heckling and swooshing of my arms he didn’t seem to notice it or go towards it. Instead my bedroom window was much more enticing. So it flew and banged into the window (this was not my intention) and then continued to flutter around it trying to get out. Fortunately my curtains were mostly covering it so it allowed me to come up from an angle and slowly bring the curtains around it like wrapping it in a blanket. Then I reached in, got a hold of it and quickly ran outside to toss him into the air. So that’s two in three days. I’m on a roll!