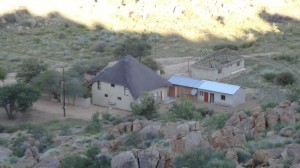 My room was on the top right of the one side of the grass roof house. You can see the window. 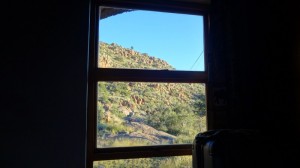 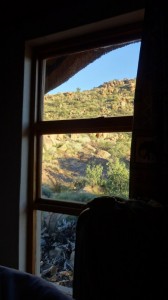 It all started in a top room in the main lodge. The lodge is very nice but I have to tell you, the top floors aren’t to my liking. Most of the time they are pretty good, I mean the beds are nice, the decor is nice and the bathroom is very modern with good tiling and so forth. BUT, AT NIGHT, when you are sleeping that’s when I begin to have a problem with it.

Now I don’t consider myself to be a “Girly Mon” (Arnold Schwarzenegger-like voice) but I had a hard time dealing with the bugs and possibly other things. You see, when you have a grass roof house/lodge out here in Africa it is considered to be quite a luxury, and by most standards it is quite nice. However, it usually doesn’t seal all the way where the cement meats the grass roof. Therefore you are inviting anything that flies or especially crawls into your cozy little home to spend some quality time with you.

Needless to say I didn’t sleep very well, especially after this crawled across my neck and face one night… 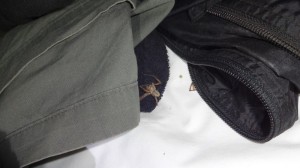 It’s hard to tell but this thing would fit nicely in the bottom of a soda can. It’s partly smashed already… Just before this picture it was running across the other bed in the room and if you take your two index fingers pointed out straight and do a drum roll on something made of a soft material that’s what this thing sounded like running across the bed. It was surprisingly audible.

I was sitting straight up in bed with the light on at the time that this happened. It ran across my neck then face and I quickly swiped it off not knowing at the time what it was. It flew down and hit the bed then crawled down and into the crease where the mattress met the part that holds the mattress up higher. When I tried to get a better look at him he flopped down to the ground flat, flipped itself sideways onto the wall and disappeared behind the night stand. This all happened in a few seconds. Needless to say, I wasn’t about to go to sleep with a goliath roaming around the room. I knew he would be back. So I waited. About 10 minutes later is when it ran across the bed next to me and I smacked it with my big flash light a couple of times. I felt like I was in something like the scene from Aliens where they get locked in the room with the face huggers running around hahaha!

Ok, yes, that was the worst out of everything to date, but there was another night I had a small spider crawl across my face (what the H*$# is it with spiders crawling on your face!?!?) and then there was the meandering millipede that made its way across my duvet (that was one of those times where you just feel like something is wrong so you pop your head off the pillow and shine the flashlight around… Always trust your instincts!) and then there was the… Ok ok, I’ll stop. There were plenty more episodes take my word for it.

The worst part was that I never knew what exactly it was. I mean there are spiders and scorpions out here that would make you wish you were dead if you didn’t die a horrible painful death already haha. So you tell me! In the pitch black night what that is crawling on you and see if you don’t leap out of bed and do a superman dive for the flashlight to find out what the heck is nuzzling up to your delicate city boy/girl flesh. I don’t think I should feel ashamed to admit that it kept me on high alert. 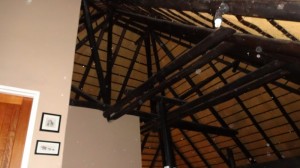 Ok, if you would permit me to rant just a little bit longer, I’ll mention the mosquitoes.
So the other part of this was that the rooms on top are open. What I mean by this is that they do not have walls and a door that you can open and close. If you go up the stairs there is a low “wall” about waist high made from wooden poles with slight gaps in between and that’s it. It looks nice, don’t get me wrong, but when you turn off the lights the mosquitoes inside the whole house start to hunger and naturally they find their way to you since you are out in the open. 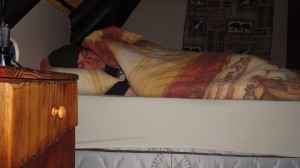 So I don’t know if it was that I was covered from neck to toe with blankets to combat the crawly things or if it’s just what mosquitoes do, but they have a terribly good habit of buzzing around your ear before they land and drink you. Me being a light sleeper (it’s a good and bad thing at times) I would always wake up ferociously and try to switch on some kind of light and kill these things, which actually proved to be surprisingly difficult. At first I didn’t pay any attention to them but after the first few nights of waking up with all kinds of bites on me I decided I had better exterminate these parasites. In fact, the one morning I woke up, I just so happened to look over at the wall about 3 feet from me and I saw THE fattest mosquito I have ever seen in my life. When I moved in closer to look at it (for at the time I was still a bit confused what this pudgy winged bug was doing on the wall) it was so fat with blood that it merely wobbled it’s obese body up the wall a few steps but apparently couldn’t even take flight.

*SMACK* I squished it against the cold cement wall… In fact maybe a little too hard. When I pulled my hand away there was a gigantic splatter of what could only have been MY blood mixed with spindly bug parts. And it actually upset me a bit, to think that that damned thing was slurping on me all night long while I attempted to peacefully sleep. *Shakes head*

THE LIGHT AT THE END OF THE TUNNEL:

Thank God for this. Shortly after I arrived here I was told that they were in the process of finalizing the building of a room for me. Wow how great is that!? I felt like a semi-celebrity. A room just for muah??? I didn’t get my hopes up too much because you never know in general, and also because IT IS Africa, and things almost never go as planned here. I am delighted to report to you however that things actually did go pretty close to plan even by African standards. The only hangup was that right when my room was ready to move in we had an extra client that had to come in. Jaco being a nice guy didn’t tell me that I couldn’t use my new room, but then ME being a nice guy I told him that the clients must stay in my new room because it would be much nicer and more private than a room on top of the lodge. Damn my good will… Haha. No regrets however, the few days passed and soon enough I was able to move in.

Check out the new digs! When I’m in here I barely feel like I’m in Africa anymore if it wasn’t for the gigantic 3 pronged wall plugs and such. I am very happy with it 🙂 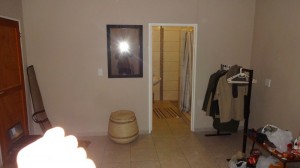 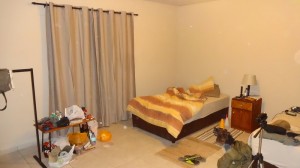 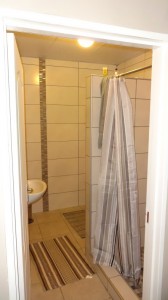 Nice huh? Excuse the clutter, my room isn’t even close to fully furnished yet so I have no place for all my odds and ends.

Eventually they will add a cement slab in the corner behind my clothes rack and make it a mini “kitchen” area. That will be nice.

This room makes me happy. I’ve been sleeping in here for about one week now and the official Bugs in Bed count is still at ZERO! … That I know of, haha!