While the clients were relaxing by the fire and enjoying a few drinks, we needed a couple extra chairs for everyone. So it was requested of me to go into the garage and grab a few extra chairs… ok no problem.

I pulled out a few, dusted them off and made sure they worked ok and I saw one last blue fold out chair in the corner. Reaching down I pulled it open, and quickly withdrew. I was surprised I didn’t jump, but there in the nice little basket of a home the folded seat of the chair made was a tree snake. My hands were merely inches away from where it was sleeping a few seconds ago. 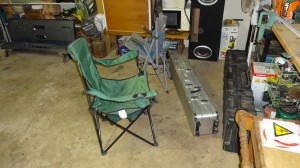 (This was exactly how things were in the picture above. I took this just after it all happened)

The snake started to panic and look around, I had a feeling it would take off at any moment. Knowing that this snake is highly poisonous and nothing short of deadly I didn’t want it to get lost in the stacks of boxes and other odds and ends. Acting quickly I slid the long silver gun case towards the chair hoping it would slither underneath it and find refuge there until I could get some help with this. There was no spade (shovel) handy or anything I could use to kill it efficiently without leaving the garage and losing sight of it. I pulled out my phone and called Andre and this was one of those moments where you fumble around with the buttons a bit trying to go as fast as you can… A few minutes later (felt like an hour) Andre showed up with a spade and I told him where it was, helped him move the gun case really quick and he was on it with the spade immediately. CHOP-CHOP-CHOP!

The young tree snake was soon in pieces. 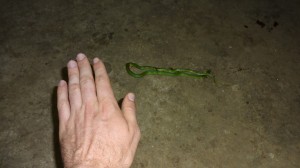 If I have my information right, they have told me that the baby tree snakes are just as poisonous as a Mamba and you will be dead within minutes of a bite. But the good news is their mouths are still very small so unless you present a finger or something they can sink their teeth into, they cant get a hold of you to inject their venom. So whenever I am moving rocks or digging through the firewood pile (favorite hangouts of the snakes) I try to be very careful where I put my hands and fingers. Fortunately I learned this lesson the EASY way!

We are under the impression they have a nest somewhere just behind the garage underneath the root system of one of the trees because there have been tons of baby snakes found around that area in the last few months. There have also been black mamba sightings. (Keep in mind this area is about 40 yards from where I sleep)

Coming soon, THE BIGGEST SPIDER I have seen in Africa to date!!! And of course much much more. Also, I am in the process on updating you guys on how my buff hunt went with PH Ian Blakeway. It was excellent and he has invited me along for his other buff hunts in September/October. I told him I would love to join him as long as I am still in SA.