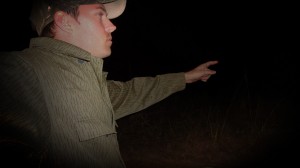 It was not the first time we went out armed and looking for the poachers. But this time it was a little different. We got the call just after 6pm. It hadn’t been dark for long and in fact, the sun still silhouetted the mountain ridges with its final glow as I rode off into the darkness, bouncing along with the spotlights wires stretched to the max from the cars battery under the hood and over the cab not even reaching the back of the bukkie (truck) where I hunkered down from the cold, and where every bump my bones smacked into the steel framing around some part of the vehicle. But be sure not to misunderstand me, it was still very very dark. With no flashlight you could barely see your hand in front of your face. It was a starry night but that was the most help we were going to get from the light gods for tonight. The rest was up to us…

One of our workers had heard the dogs coming in. So we went out with the truck a spot light and a rifle (Andre was driving and had the rifle and of course his trusty .357 strapped to his hip).
When we got closer to the barking of the poaching dogs which took about 10 mins to drive to we jumped off on foot and started walking through the bush towards the noise in the pitch dark.
I was armed with either the flashlight or spot light when I was standing on the back of the truck.
I cannot begin to tell you how much I felt defenseless… I felt so naked out there, as far as protection goes. A simple pocket knife was no match for a man in the dark with a sharpened panga (machete) or who knows what. And that was IF I was at the ready while stumbling through rocks and ditches and bushes in the darkness.

We walked towards it all for a while then stopped to listen and Andre turned off his torchlight (which he possessed at the time)
After walking through the prickly bushes and crunching over dried grass for a what seemed like 10 minutes (was more like 4) I suddenly heard a rustle to my right side… the opposite direction that Andre was facing at the time with his light.
I have a lot of trust in Andre so I assumed he heard it too but that he just didn’t think it was any noise of importance…
Another few seconds went by which felt like 5 minutes, and there was the noise again. A soft, brief rustle. I was hesitating but finally I broke silence and whispered to Andre “I hear noise to the right.”

He spun around with the flashlight and shined the it where I had directed him to and there sitting upright were two poaching dogs being almost perfectly silent. (as they are trained to do so)
Andre fumbled with the light and the rifle all together but eventually the flashlight found its way into my hands and he worked the action on his .243 and quietly but sternly commanded me to hold the light on the dogs…

The shot went off and the one dog collapsed to the ground not making a sound. My ears ringing the other ran off to the left and down into the ravine farther but we lost track of him in the tall grass almost immediately. We searched around a little more then heard more barking farther away in another area up on one of the hills in the opposite direction we were walking.
We marched back up the ravine to the truck and began driving back and forth again on the main road with me on the back of the truck working the spotlight back and forth over the ridges and valleys in the dark night. The frigged cold air was stinging my skin as it went down my collar and up my sleeves.

We were getting closer…

Andre and myself jumped out on foot again and stopped every once and a while, perfectly silent just to listen. I found myself breathing slowly through my mouth.
The barking was still too far away even after walking in that direction for a brisk 5 minutes. We then decided we needed to drive around the large hill to the other side so we jumped back into the truck again and sped off bouncing down the dirt road… myself barely managing to stay upright AND steady the spotlight, never-mind the bitter cold.
Then we were getting yet even closer, but by that time the barking had stopped. We slowly drove in that same direction we knew we had heard the dog(dogs). I kept scanning left and right with the spotlight, finding nothing but shades and shadows…

THEN! Two sets of eyes lit up like duel glowing orbs. I shined the spotlight on the bigger animal and it turned out to be a Gemsbok. So I panned the light to the left to the smaller set of eyes and there it was! A poaching dog! At this point I yelled to Andre piloting the truck that it was a dog on the left. I steadied the light on it for Andre but this time I was wincing. For the last few shots were already ringing in my ears. I only had one free hand to plug my one distant ear and I just turned my head away from the rifle that was about 4 feet below me and CRACK!!!

The dog was hit.

But the shot was taken just as he started to run towards the right.
There was some thick brush and the dog was crying out as it ran behind it but quickly it came to silence. We could both tell without saying a word that it wasn’t a hit where he would die quickly.

The dog settled in behind the brush and then slowly so did we.

I jumped out of the back of the truck, faithful spotter and used the flashlight to light up the area where we last saw the dog.
As we approached, looking left to right fifty yards ahead, there it was, lying on the ground its back facing us. It got hit in the stomach just as I thought, clean through. The soft point bullets tore the poor ol’ boy up inside because I could see the area around the bullet wound swollen and bulging from the impact and penetration… There was a decent amount of blood coming out.

Andre approached 3 steps ahead of me to see if he was still alive. As we got closer, it barely moved. It was clearly not doing well at all and probably would have died in 15-20 mins… but it would have been really painful for the dog. Just as I was willing Andre to please put him out of its misery… I heard the “shack-clack-clack” of the action being worked.. My flashlight froze in place. I turned my head again, my ears rang even harder, and the dog never moved again.

We switched off all lights and listened…

Silence. Crickets chirping, but no wind, no breeze, nothing.

If there were more poaching dogs on the property, then they all hunkered down and kept quiet because there were no signs of them after that. I asked Andre if I should continue scanning with the spotlight on our drive back in and he said “Yes, go left and right with it.”
So I did.

The only eyes I saw in the blackness of the night was impala and blue wildebeast. Which made me flinch at first to warn Andre of the glowing orbs staring back at us but too soon I realized it was just game animals.

We didn’t kill them all, but that is just about impossible. However, getting two in one night is a very good thing, and very rare. Us warriors, we did quite well and a hot dinner was ready and waiting for us as we arrived at the Lapa a few chilly minutes later.

I don’t know that we will get any pats on the back for our efforts tonight, especially me, but I do believe we earned our bacon this time.