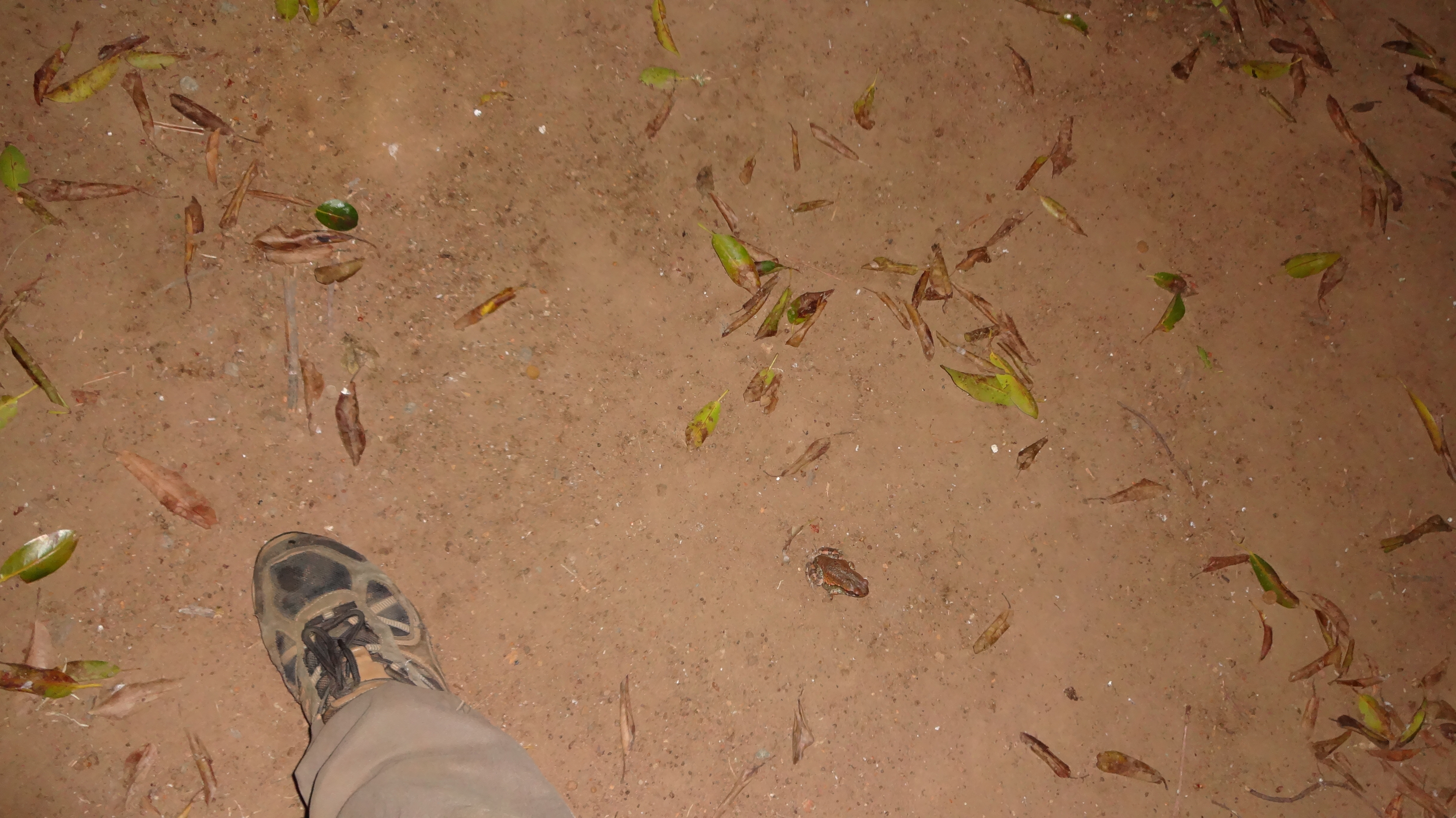 Ok, let’s be honest here. I am backlogged on about 20 posts I would like to put up. But I’m going to give you guys at least a solid update today.

Our Spanish client just left and we will have two Americans coming in this Sunday, so right now we have a few days in between and fortunately for once there isn’t THAT much to do on the farm. I have however been ordered to have 3 bushpigs hanging in the freezer before Izak gets back. He told me he wants me to shoot a nice one for myself and then two more younger ones for meat for the camp. I’m not sure exactly when he is returning but I think I have about 2 weeks or so, possibly more. Either way I will be spending a lot of time down in the orange grove on our neighbors property by myself, in the pitch dark in a lil tent hide till the early hours of the frigid morning. They have a night scope on a rifle that I believe shoots a 30-06 Springfield. Hopefully that is enough wallop for these tough lil piggies. I would actually love to use my 458 Lott on one of them but being in the dark with the open sights isn’t going to work too well. To tell you the truth, I would love to use this thing on ANYTHING at this point. Some of you might hate me for saying this, but I’m actually pondering taking a giraffe with it

I have already finished my other “jobs” to get done while he was gone. I fixed some light bulbs around some of the buildings on rickety, swaying ladders that should probably be thrown away or destroyed forever haha, and I repaired the red Honda dirt bike from some crash damage (not me) that it had. It had several bent and broken parts including some levers and the shifter. I also put in a new battery for it because for a while I was having to get it rolling and then drop the clutch to get it started.

Also, I have done more long distance driving in the last month than I have in my entire life. Several days of 14 hours on the road. The clients I took to Hluhluwe I drove straight to the airport when they were leaving and that was a 9 hour drive, as well as tons of 6 hour one way trips to either pick up or drop clients at Joburg airport from the game farm. Now many of you that know me well know that I’m not into energy drinks. Well I have had to rely on a few of them recently to get me through these long days on the road. I can’t pull over and nap when there are clients with me. And more importantly, most areas you wouldn’t want to pull over anyways because you might get car jacked or mugged/killed etc. 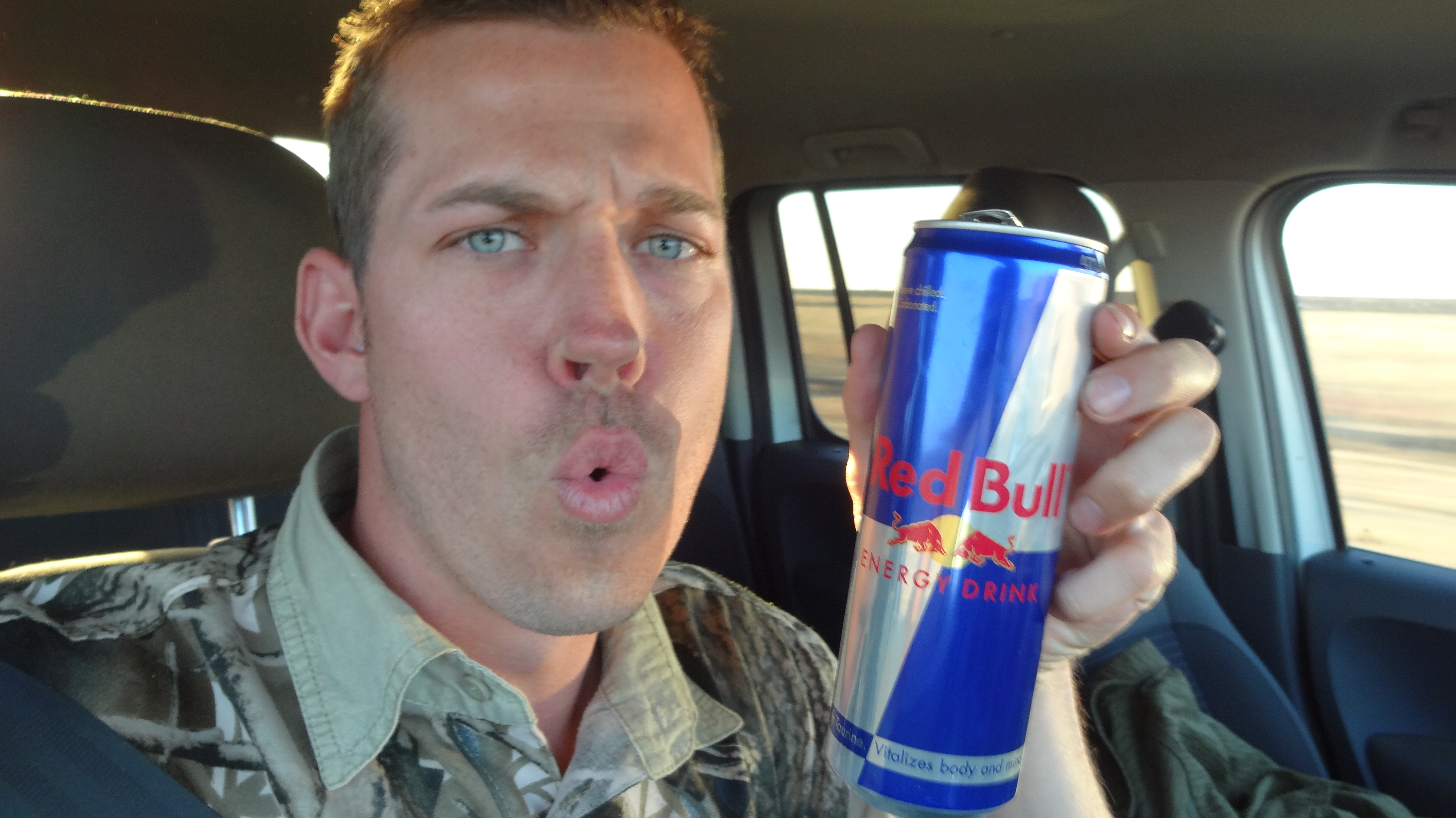 “Wooooooooooooo!!!!!” is what the caption should read and would express how I was feeling lol. So does it work? Yes, but caffeine and all that has a strange effect on me in large quantities. I get more jittery than anything else because I don’t usually consume much of it. Either way with that and pumping loud music I made it through the journeys safely.

About a month ago I finally had a couple spare hours just before sunset to go and sight in the 300 Win Mag I brought along with me. 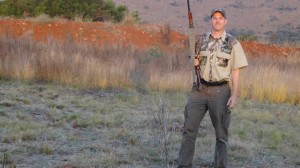 So I grabbed one beer and some targets and went off to our “shooting range”. 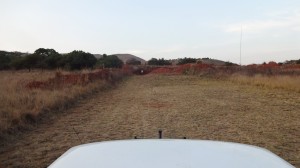 Wouldn’t you know it!? It DID get out of whack! By a good bit too! I’ll show you the target here: 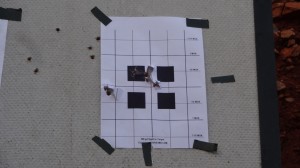 The very first shot was the one that is in the upper left just off of the paper. After that I adjusted the scope mostly downward and just a little to the right for starters. The next two shots are the ones touching in the middle left on the paper. The fourth shot is the one in the center of the upper left black square. After that the next 3 shots came in this order: Dead center but just to the right, and then the two that are touching just above dead center and to the left a small amount. At that point I was satisfied enough that it was shooting a little bit high from the center point and I believe it was just me who pulled the last two shots slightly to the left of the center line. So that’s about where I wanted it without going through too much ammo (I only was able to bring 40 rounds). 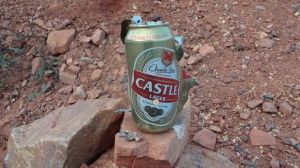 The can was filled with loose sand. Bullet hole just below the word “Lager”. 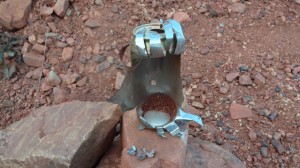 Check out that exit wound! This was a bad day to be a beer can.

I love how it flayed out the metal into so many petals. It’s almost like a piece of artwork

Some South African guys struck a deal with us “the farm” to use their heavy duty CAT grader to grade our main dirt roads and in return the two guys wanted to be able to shoot a blue wildebeest and an impala each for biltong and dry wors. Well the one guy I took out hunting (I was able to guide him which was pretty cool) towards the climax moments of our stalks soon insisted that I must take the shot for him. I am in no way teasing him or speaking badly of him but he told me how hes a bad shot, and how even his friends make fun of him. So with much persistence he finally persuaded me to shoot for him. I thanked him immensely and we both got everything we could hope for out of the hunt

Keep in mind this was just non-trophy meat hunting so I’m not showing you these pictures to brag of horn size or this or that, it’s simply about the memories and the experience. It was very nice of him to let me take his animals for him. 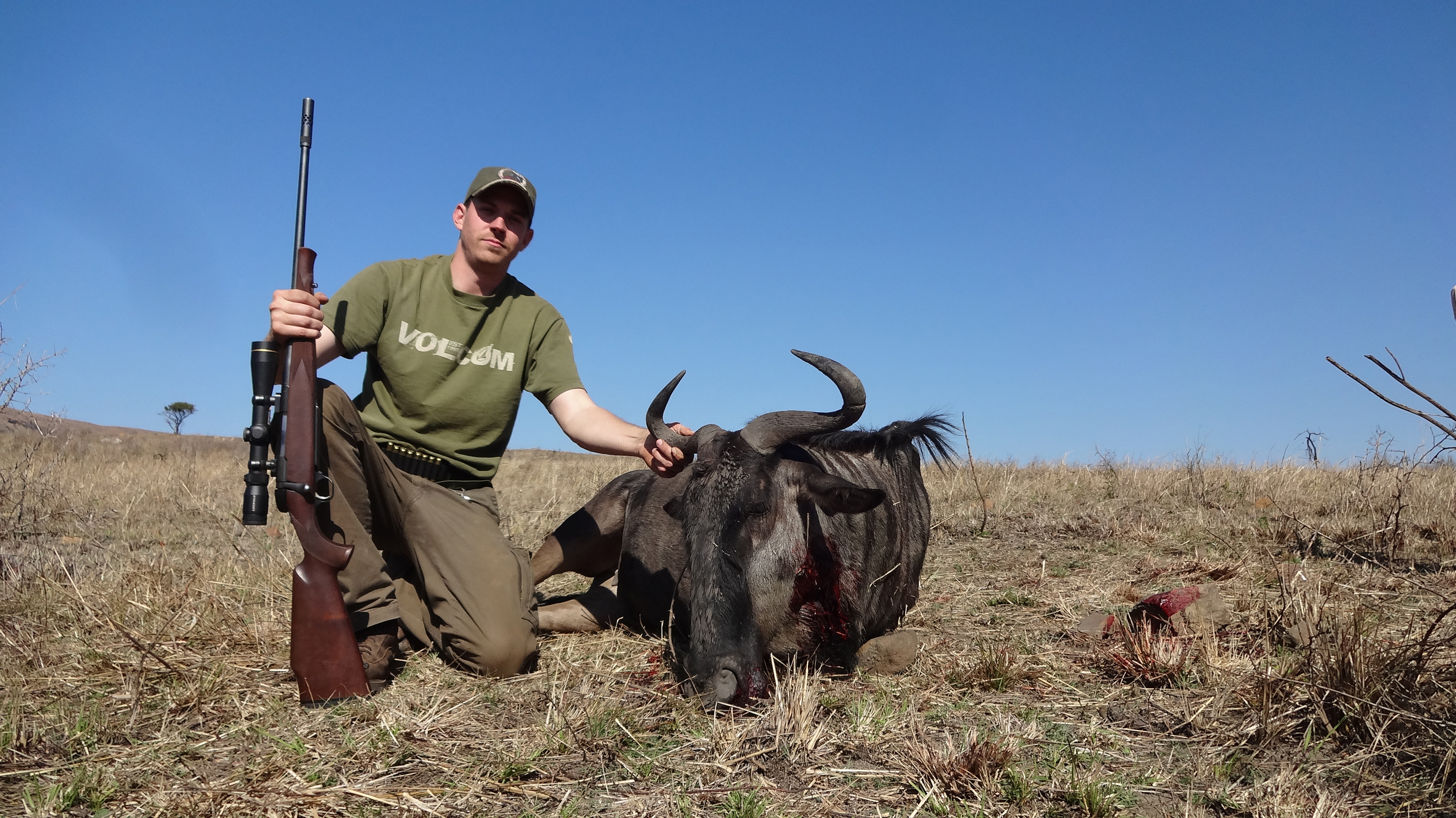 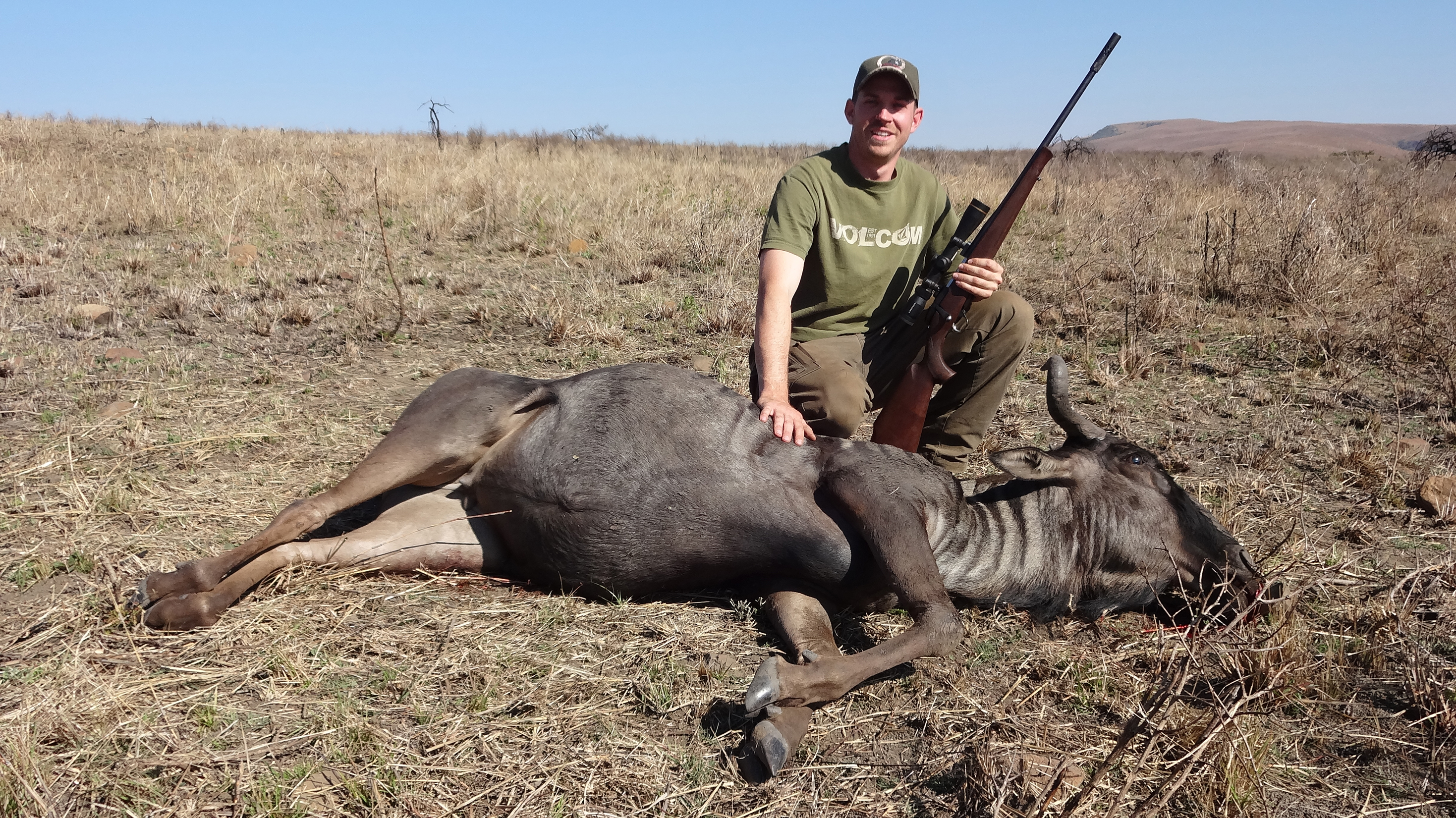 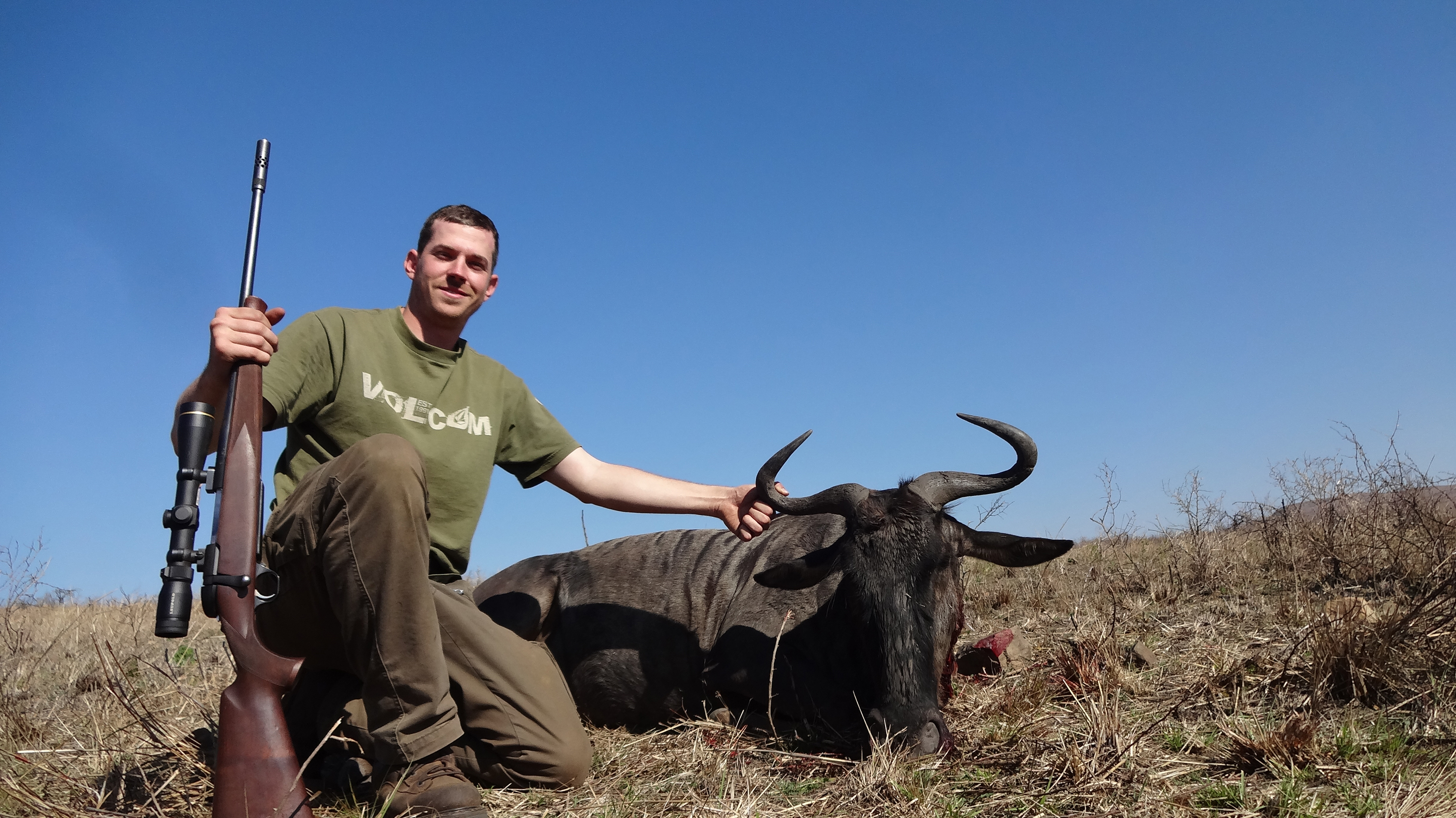 I also shot his female impala but it was a head shot so I didn’t bother with the gore.

And later that night, we celebrated by the fire with the classic South African drink. Brandy & Coke! 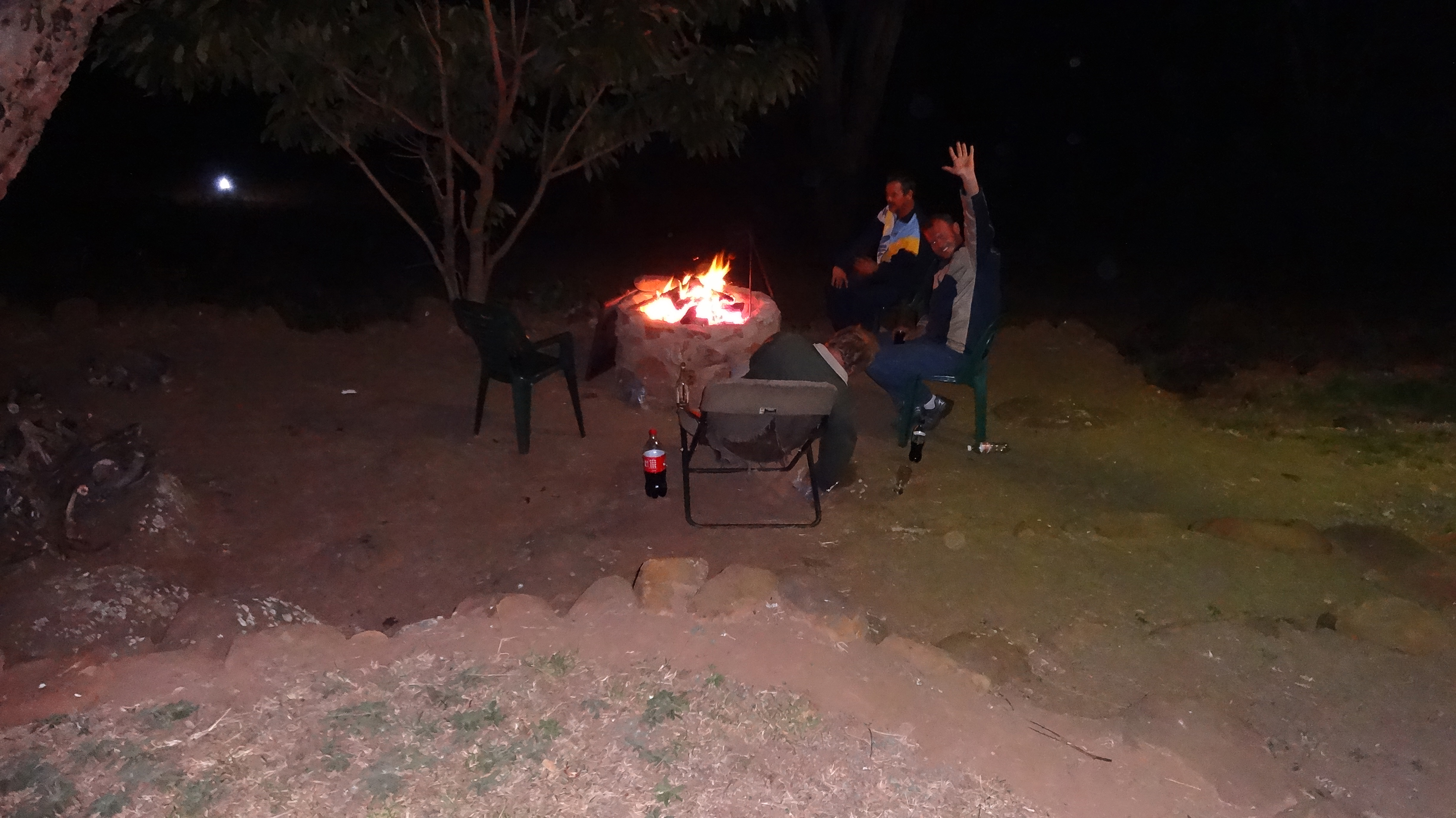 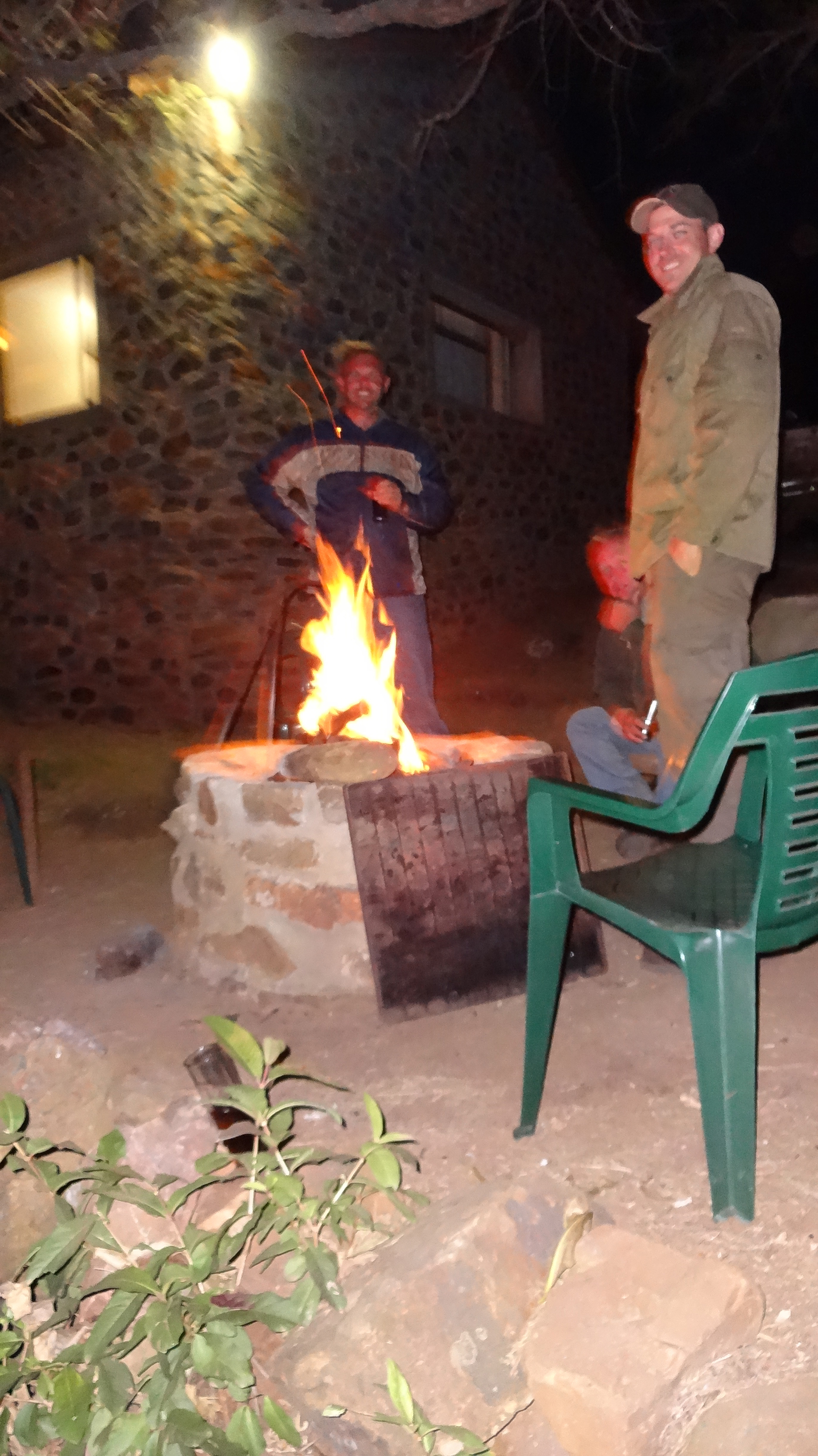 We had a really good time, and these were some nice guys. Excuse the one blurry shot but I had to get creative and hung the camera from a tree branch to get a nice angle of all of us but it was swaying in the wind a bit.

As always there is plenty more to tell but I have spent half the day on this post and I am very pleased I managed to put up a bunch of pictures and even a video for everyone! =)

If I can I will continue with something like a “Part two” tonight. I need to keep working on the cape buffalo story too *gulps*. Apparently everyone is really on edge for that one and I’ve been getting some requests/inquiries about when it will be ready. As I mentioned before, the big thing with that is having time to edit all the vids and then compress and upload them. The 3 minute video I uploaded today for this post took a little over two hours to upload so you can imagine how long it takes for anything that is a bit longer. I usually have to leave my computer on overnight and do it while I sleep.

Ok, I’m off to go put bait out for the bushpigs and swap the memory card on the trail camera. Hopefully the big piggy will start coming in more regularly because I have a bullet with his name on it

He’s lucky for this weekend though because temperatures are supposed to drop to around freezing and I’m sorry but there’s no way I’m sitting in a blind for 6-8 hours in those temps! Things should get warmer starting Monday so I’ll start hunting then.

And hopefully we can eat dinner soon tonight, because my stomach is-a-grumblin!

I hope everyone is doing well! 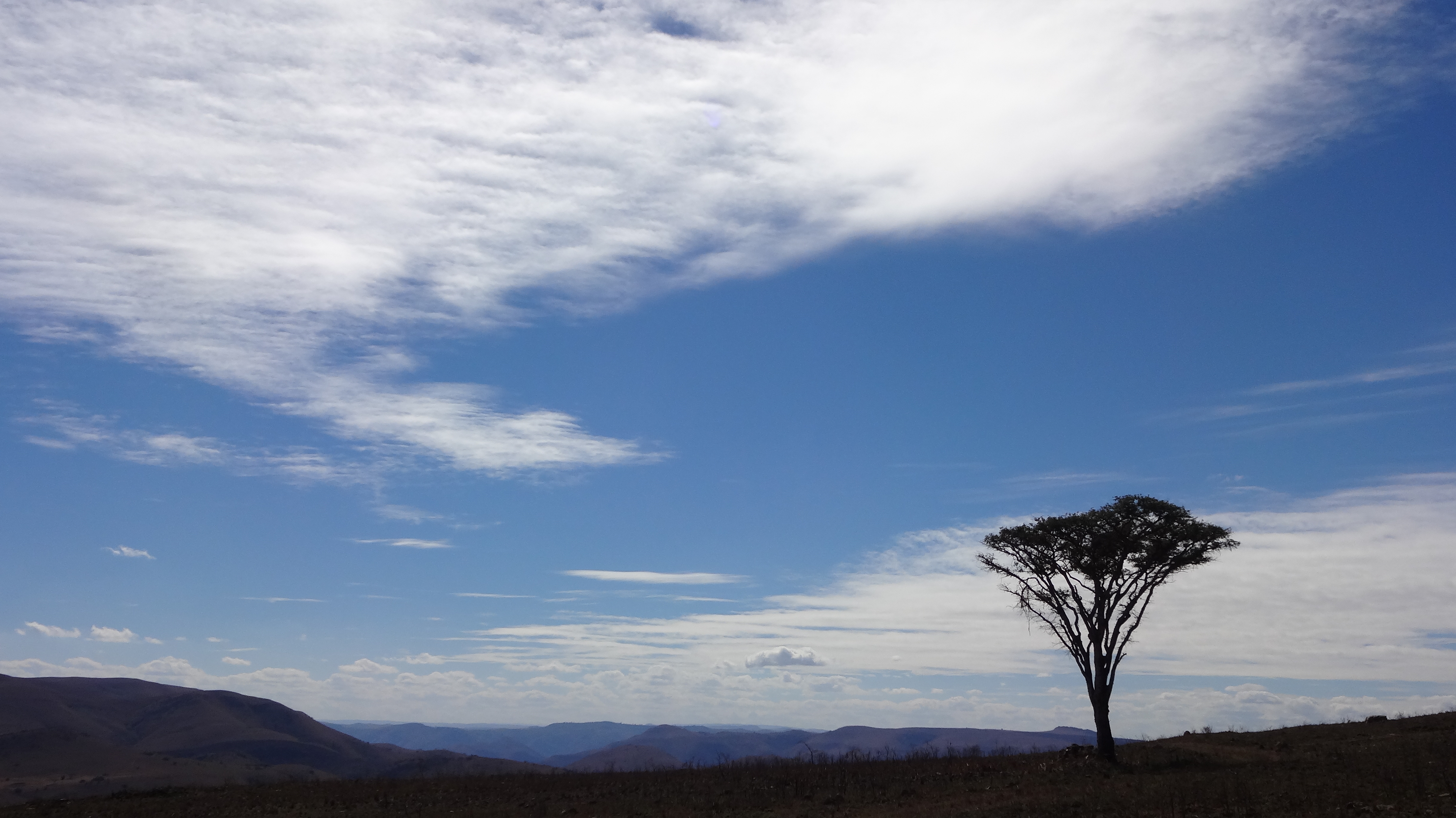 Well here we are again, wrapping up our last night with another set of clients. This can only mean that someone has to drop them off at the airport. These are a bunch of people from Alabama and other parts of the East Coast of the USA.

They were mostly bow hunters and were successful getting the animals they wanted on this trip. Let me tell you, sitting in a blind for 4-6 hours is very trying if you are extremely behind on sleep. You’re eyes feel like they weigh more than a dozen elephants sitting on a flatbed truck!

There has been a lot of ups and downs lately but I am happy to say that I am still hanging in there and doing my best. I’ve learned a lot, and more importantly I have also learned that I have much, much more to learn… 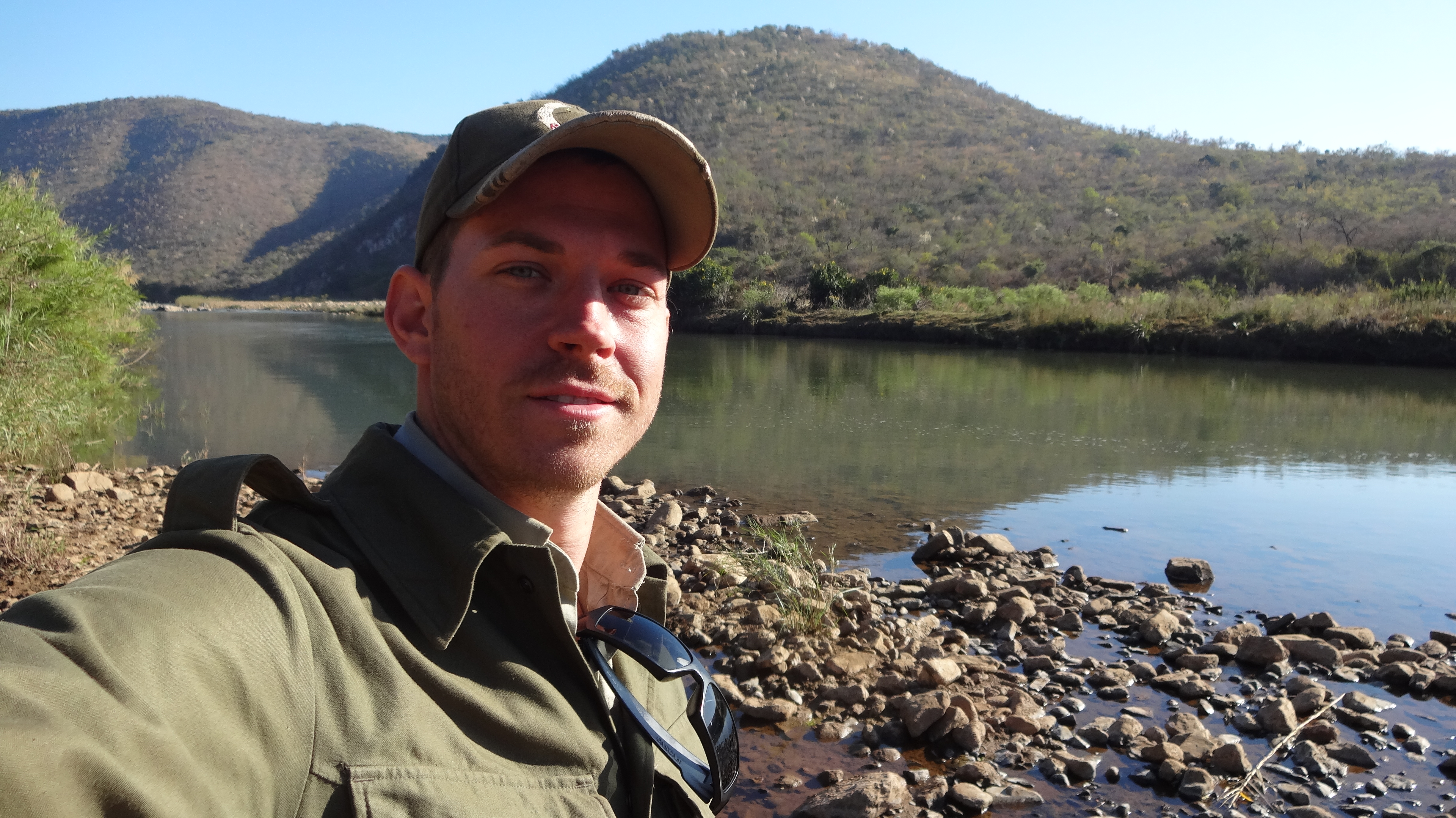 I hope you all have a great day.

This is a vid from just a few days ago. The description on YouTube should tell you mostly everything you need to know about it. 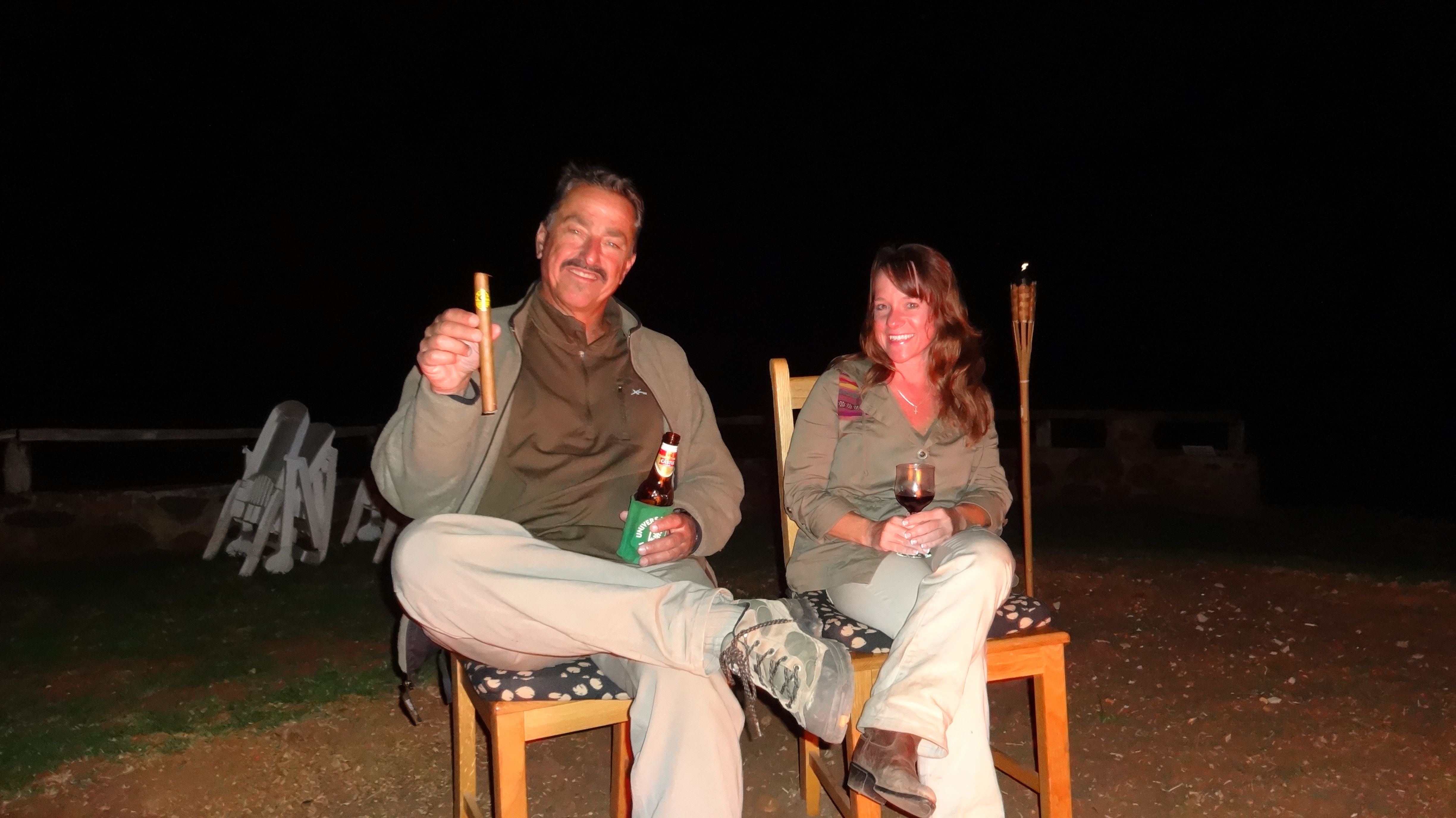 These were my two lucky guests I was escorting for the remainder of their trip in SA. They were tons of fun and really great people.

All I had with me with my little Sony point and shoot to take the vid. The storm got much worse just after the video stopped but you can see how often already the lightning was flashing.